Find Yourself A Teacher: 4 Must Have's Towards Finding The Right One 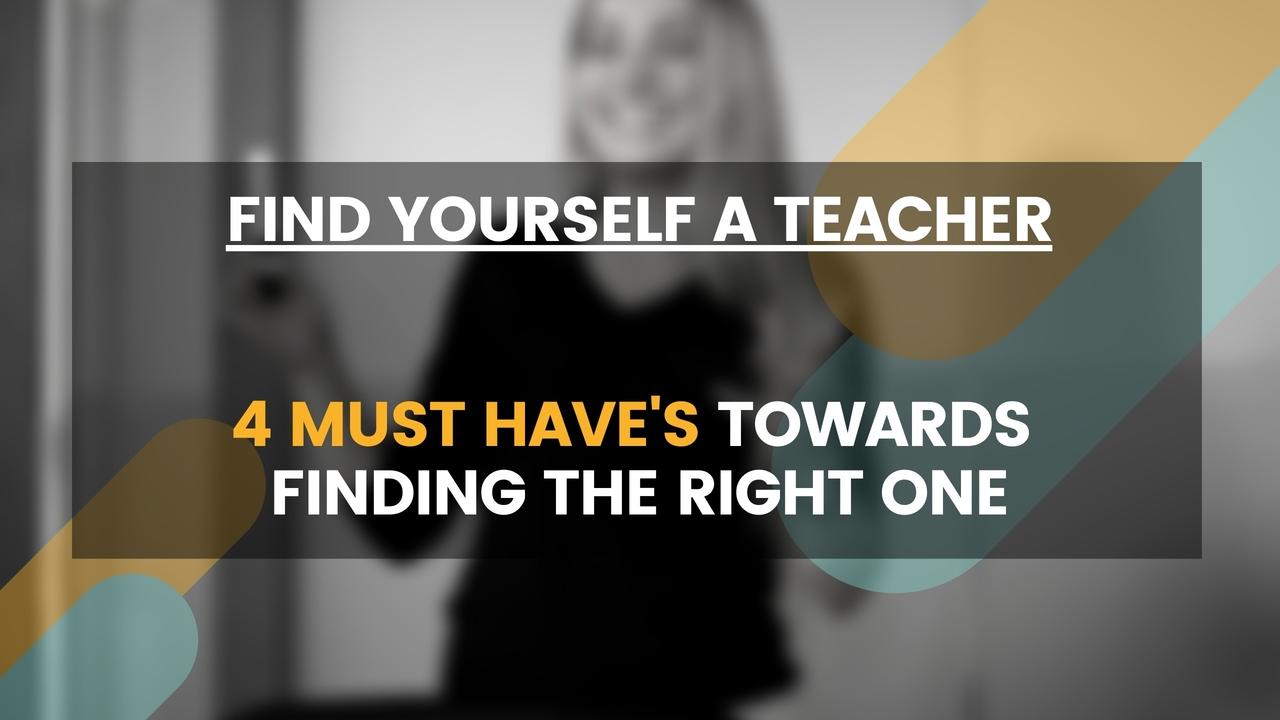 The difference between a good teacher and a bad teacher is largely the experiences you have versus the experiences they have had and the metaphors used. Now I'm not talking of course about teachers that were just jerks. There are certainly some of those.

And I'm sure you can come up with a few that you felt personally hated you. and the feeling was well... sort of mutual.

So, what I mean is, the teacher that was a good teacher was the one that was able to talk to you in a way that you found both interesting and relevant.

Now, you can be taught Geology geometry, algebra, biology, from one specific teacher, and be incredibly bored and feel like the class itself doesn't make any sense. Then you can have another teacher who uses the same sort of language you use and maybe even uses examples that you find interesting to suddenly create a engagement in your mind, I think, a show that does this really well, there's a show called Because Science

Kyle Hill (the host) does something very interesting, he takes the concept of physics, biology, and astronomy, and he adapts it to Modern Pop Culture.

So instead of just teaching you about the formula for terminal velocity or the formula to figure out the production of force. He uses it in a interesting way where he might ask:

Can you really punch someone's head off their shoulders? Can flash outrun Superman? Or, Is it possible to actually become a witcher?

Now on the actual basis of a headline itself these are topic points that many people will find relevant or at least interesting, but the reason he's discussing this is not because he is trying to just make general talking points and fanfiction.

He's an educator at heart and he’s using this platform with these Pop culture ties to speak in a way that Gen Z and Millenials would find compelling. And thus, show them actual science formulas and increase their general scientific literacy. He asks them to work through formulas with him. He also actively asks them to correct him if they find that he might have said something out of turn, which he then goes back and explains himself on.

This not only shows him to be an effective educator but allows a discussion to take place further enhancing the idea of critical thinking.

Even if you don’t connect with Kyle's message, I’m sure that you could easily recall a time where you read the same information in 2 different books and one of them resonated with you, giving you an immediate AHA moment.

Even though they provide the same information, your level of understanding was different.

Consider this, with so many books and opinions available about business, it’s easy to get buried under information.

So my challenge to you is to find someone you trust and that speaks to you in a way that makes sense and learn from them. See what they are an expert in and be mature enough to know that you need their help.

This doesn't have to be some big wig, as a matter of fact I’d say it’s much more helpful to see what works for someone that is a step or two above you instead of someone that's already at the finish line.

Why? Well because the person that’s at the finish line might have forgotten exactly what they did that made them successful or they might attribute their success to things that hold very little relevance to what is capable today.

Taking advice from someone like Gary Vee who began his e-commerce wine business (after dad already had a successful brick and mortar shop) in 1996, who’s big epiphany was “free shipping” may not hold the same weight if you’re starting in today's market.

I’m not trying to hate on Gary Vee, I’m just using him as an example.

On a podcast I was listening to they had a guy come one that was supposed to be a case study on how to build a 7 figure marketing agency. Well, this person interned out of highschool with a lawyer (his neighbor). This lawyer then paid him $1000/month to write weekly newsletters and also gave him a list of 20 other Lawyers that wanted the same. Some of them stayed on and some didn't (but he’d get new clients purely through referrals). He then met a marketer that after building a relationship with, decided to give him his whole client list while he went onto bigger and better ventures.

I’m just saying that if you’re clicking a headline that reads “Learn how BLANK went from barely graduating highschool to creating a multi-million dollar business in just a few years, and how you can too!” and ignoring where he started in this entrepreneur race then you’re never gonna get the same results! Why? Because you’re not even running the same type of race nor from the same starting block.

Once you can do that, work on making them a friendly rival until you surpass them, once that happens find the next person then rinse and repeat!

If you’d like some help with your email marketing we’re going to be hosting a FREE class May 8-9. Sign up now at https://www.dncmarketing.org/signup