Why "Bloody Water" Is A Good Thing 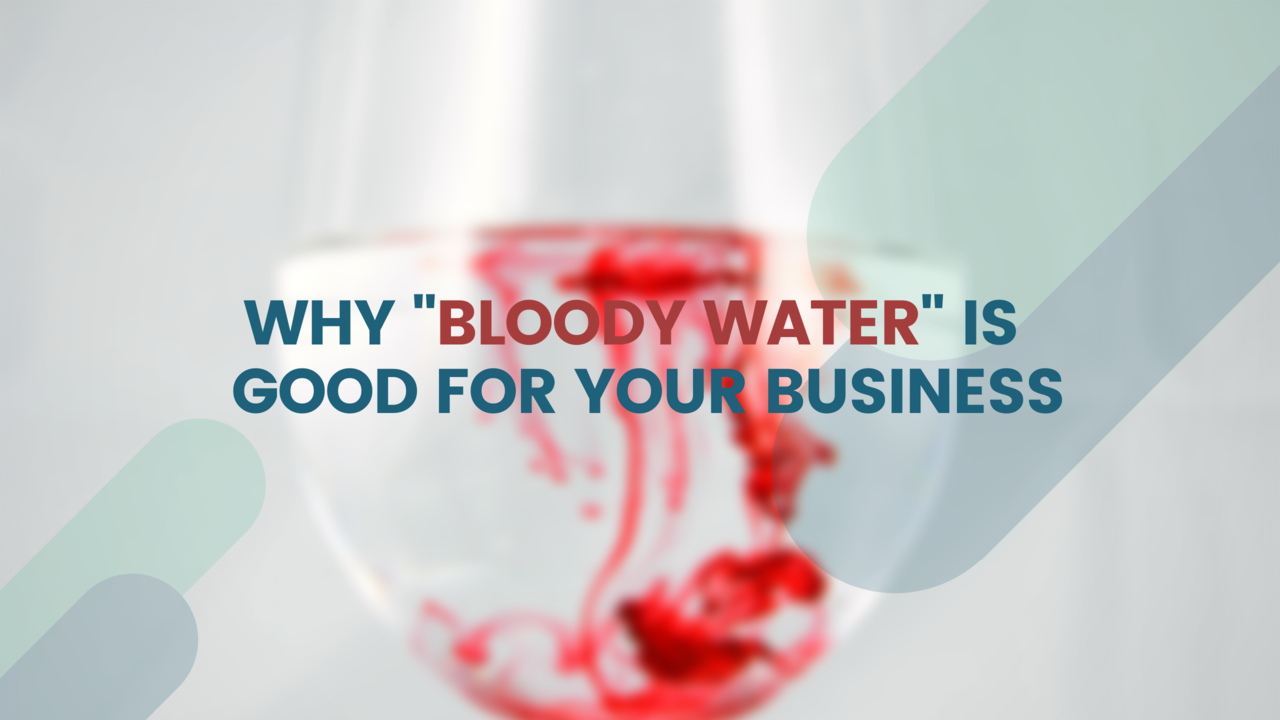 Julio: Today, we're gonna be talking about what our deep sea fishing trip taught us about selling and why bloody water is actually a good thing.

So we're talking today about why bloody water is a good thing.

Darian: What often comes up is the differentiation of a brand, right? People have a really hard time writing product descriptions, writing emails, writing offers, everything because they're just like their competitors and they really don't know what to say and that's a bad thing. So they don't know what to do. Well, it's not actually a bad thing. That's a great thing. That is a great problem to have because it shows you that your market is tested.

We have worked with other entrepreneurs who have found themselves in a very difficult position is when they're in a market that is not wanted and there is not enough of a market for them to actually make any money.

So yes, bloody water is a very good thing because it means there is money to be made. Market justification.

Julio: I'm sorry I was trying to stifle a burp.

Julio: Sooooo, we were just talking about market justification. Essentially what we're really getting at is not just about product descriptions and whatnot, in DNC marketing we have our I.N.S formula, which is Industry, Niche, and Specialization. In other words, it allows you to kind of funnel down. So you can say something like, my industry is clothing. okay, now my niche is going to end up being men's clothing. Then my specialization is going to be tailored men's clothing for gym-goers.

However, if there is no market to be had or you try to go so far away from what they call bloody waters that you end up going into a sea that is basically just not filled with food. Okay.

Darian: Okay. We just binge-watched Tiger King, so an example that relates to that might be you trying to sell to Joe Exotic. For example, his attire, there are not a lot of people in the world who are as ballsy is that to want to wear those kinds of outfits all the time with such a crazy, exuberant personality.

So if you niche down to only want to sell leopard print to a certain group of people who sell, who owns zoos and something like that, that's what we're talking about is if you niche down so far, because a lot of people have the advice of the, you know, the riches are in the niches. You have to find yourself in such a small community to really build it up and make that money. But there is such a thing as niching down too far and really pricing yourself out of a market because there's just no money to be had there.

Julio: So I guess the idea really is that you need to find your own unique selling point. But let me clarify that. It's not by unique, it doesn't mean that nobody has done it or will do it when, when Mark. See that's kind of the one thing that kind of messes people up is we all, as marketers, we try to be so damn clever with everything that we try to make it seem like it's harder than it is. So we come up with terms like a unique selling point. Unique meaning just one, right? Like rare. But that's an ideal. That doesn't really exist because in an online world where there are 100,000 clothing creators being a literal one of a kind is near impossible. Thus the idea of why storytelling is important. Why the idea of having your customers connect with you as an individual rather than just as a business that sells baby clothes or whatever it is.

Darian: So that's why using one, the starting point of I.N.S is the first place you should be starting. What is your industry? How can you break it down to a niche and how can you specialize within that niche. Like specializing down to men's clothes for gym rats. People that define themselves as gym rats, people who focus on building muscle to the point where they need clothes that are tailored to fit them properly or they end up looking like they're swimming in their clothes.

You want to be specific when you talk to them, but you should still be asking yourself:

However, what is a maybe still niche but slightly more broad, what would you go for? The people who do want to go to the gym are muscular but they're not competitors, right? They don't have 25-inch arms. Maybe they're guys that do have a decent physique and they do want their sleeves to be a little bit tighter, so that way it shows off their biceps. They want their chest to be cinched a little bit more. So the tee-shirt really hugs the chest, but then they want the waist to be just slightly tapered out. So that way it hides the gut and makes them look so much more muscular than they really are.

Darian: See, you just spoke to so many objections, so many questions that that customer would have. Do you know me? Do you get me? Can you answer all these questions and things that I'm looking for in my clothes?

That was a very masculine example and if you have followed us for any amount of time, you know what a blowhard I am. I like to give a million-plus examples and Julio is very much like, please stop giving examples. But I love examples. So here we go. We did the very masculine route. What about something a little bit softer like baby clothes, right? What is your industry niche and specialization for baby clothes? Maybe it could be premies, right? Or it could be twins, something like that.

So if you think about all of the stories you can tell two brand new moms that you know, tie into the fear of being this mom for the first time and all of these questions that we have and uncertainty and no matter how much preparing you put into it, you just don't know what's going to happen. And Oh my God, now the baby's here. Now, what do I do? There's all this advice you can give and as the baby grows you, your brand story grows with that baby. Right? As the clothes get bigger, the story changes a little bit.

Now the mom's a little bit more experienced now she has a second child now it's the funniness that comes up from it. It was like, Hey, remember when these things used to happen and you really used to worry about it and now not so much.

Yeah, the baby ate dirt. It's fine. But you know, last year with the first baby, that was a... wait, I have a story!

Julio: Is it the one about you eating our newborn's poop?

Darian: OMG NO... we're not telling that story right now. That was an accident... We're gonna... We'll come back to it. Anyways, once I took our son to a park when he was probably 18 months old, but probably younger, I don't know. Very small.

I took out baby wipes and he was trying to play on a rock and I was baby wiping, cleaning off the rock that he was on. It was just him and at your work. And I remember getting looks from people and I did not care. I was so worried about him getting any kind of germs or dirt or anything on him. I was just like, I don't care if I look like a freak.  I'm cleaning this rock before my baby plays on it and now I want him to like just stick your hands in the dirt, help me garden. It's okay to get your hands dirty. It's a very different story.

So you can see all of the different possibilities that you can make your brand unique. Like just because that water is bloody, just because there are a million and a half people selling baby clothes doesn't mean you cannot speak to somebody and really pull them in because half the battle is showing your personality and that is one of the hardest things for people when you start writing, you trying to find your voice, you know, quote-unquote, what is my voice? You can't assign a voice. It's something you develop as you continue to write and tell your own story and your customer story through the voice of your brand, through the journey of creating this brand.

Darian: So you have to be courageous and say something and occasionally put your foot in your mouth. But hey, the beauty of that is you can backspace or you can edit it out of a video or audio, which we've done because sometimes things just come out and you know, it's you being honest, it's you trying to think on the fly and be yourself.

As anybody who has a close group of friends and has maybe been hanging out for a little too long, you've got a little too comfortable. Sometimes you say something and you're just like, "Hey, I'm really sorry about that. I really, it sounded a lot better in my head though when I said it out loud". This is why I say I'm a great copywriter cause I edit myself so well!

Julio: ...I do all the editing

Darian: *stares blankly* Okay. So, um, just to recap, bloody water is, in fact, a good thing because it allows you to understand that there is a market out there. If you have any questions just say the word we're here for you!

So obviously we're doing something a little different than our podcasts. We're trying to be more ourselves. There will be a lot of foot in mouth syndrome on my part. We encourage you to stick with us, make sure to let us know what you'd like to hear more about because we want to have more fun with you!

Julio: Oh wait! You thought this was over? It's not. Yay for you. We forgot to tell you about the deep sea fishing trip we took. So Darian why don't you tell them about it?

Darian: Okay. So first I just want to preface this by saying Julio has an equilibrium problem and it's serious. I mean if you put him in a wheelie chair and push him into a circle like Lord have mercy, he will be nauseous and sick the rest of the day.

So we thought it would be a great idea to go to deep-sea fishing even though he can't handle boats at all. He gets sick immediately. So right off the bat, this was a miserable trip where I'm trying to keep it together and he's trying to keep it in. And when neither of us really fish, I don't know why we decided to do this. We were really bored. So we go out, we're deep-sea fishing and it's Hawaii. So one of the big thrills of Hawaii is to get to feed the sharks.

So they bring out the chum bucket. A chum bucket, which if you don't know is a bucket full of fish meats that you can throw into the water and it's bloody and it's gross. But the sharks love it. So they throw it out there and you know, I, on our way to deep-sea fish, we got to feed some of the sharks that came up and they were just a little, little bitty things that probably still eat half my body. But according to the boat driver...

Julio: Why don't you call him a captain?